On April 5, 2013, the List Art Center at Brown University hosted a one-day symposium titled Art and War in Iraq. This year marks ten years for our most recent involvement in Iraq, and although the importance might seem like a given, if you really look at the number of events, exhibitions, and articles, about this and related topics, the frequency may be far fewer than you think.  In a culture whose technology and international prominence has lead us to describe ourselves as globalized, what could be the reasons for these marginalized issues? One plausible answer came from a discussion with one of the speakers at the symposium, Israel-based historian and photographer Meir Wigoder, over some aptly provided humus and falafel in the lobby following the day’s events.

Wigoder lamented what he perceived as the lack of venues in the U.S. that tackle such heavy topics as the interactions between two countries at war. Given the highly visible commercialization of the art market domestically, it is easy for those outside the U.S. (or those in the U.S. who are not aware of the activities on the front lines) to conclude that exhibition spaces in the U.S. only show work that sells, and that we stay away from art that might be deemed political. It is unfortunate to admit that events like the Art and War in Iraq symposium are not as high profile as the latest billion-dollar auction at Sotheby’s.  On one hand, if you are looking for them, the interested parties are out there, however, on the other hand, Wigoder is right. Considering the controversy and ongoing struggles, the responses seem disproportionate, which is what Brown University has attempted to address. 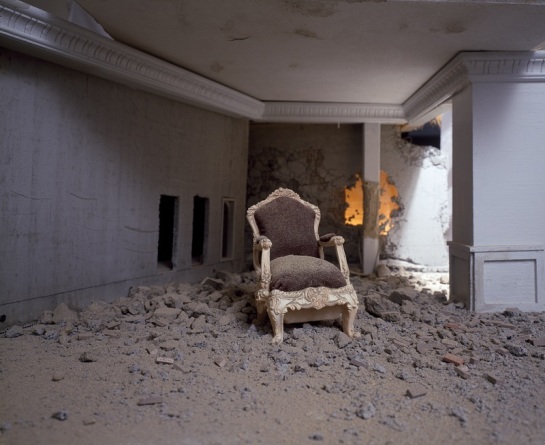 The symposium accompanied two concurrent exhibitions at the Bell Gallery, Wafaa Bilal’s The Ashes Series, and Daniel Heyman’s, I am Sorry It is Difficult to Start. The five presenters and the panel moderator offered glimpses of a complex world so much under the radar of everyday American consciousness that it is nearly an alternate reality. The work of Wafaa Bilal brought up great questions. In the second decade of the twenty-first century, Bilal observed, more and more people can be described as “finding freedom through exposure.”[1] The current modus operandi in the art world, Bilal went on, is to encode ideas in a new (or technology-based) media; a practice he labeled as remediation. This chosen vessel for our ideas can also tell us about the people behind them, and would seem to apply to Bilal as well. In his 2007 work, Domestic Tension (also known as Shoot an Iraqi), Bilal lived in a gallery for 30 days, with a remote-operated paintball gun, allowing people all over the world to log on to the Internet and shoot at him by controlling the gun. By the end of the 30 days, over 65,000 shots had been fired, however the turning point of visibility was not a major media outlet, but a social news website, www.digg.com.[2] Bilal depended on his own exposure to the Internet-watching public to carry out this marathon performance, exposure as well as technology. Bilal’s use of cutting-edge computerized equipment is reminiscent of the work of Krzysztof Wodiczko, who is known for working with those who have experienced trauma and providing them with a platform to speak out on their own behalf, often in digitized videos.  In fact, in Bilal’s classes at NYU, he includes Wodiczko’s work in his curriculum.

Daniel Heyman, There Were Three Interrogators, 2007, watercolor and gouache on paper, from the Istanbul Accordian Book

It is not just Iraqis who are worried about the ethics and human rights that may be transgressed, but Americans are also questioning our own practices. Another speaker at the symposium was American artist Daniel Heyman. In 2006 Heyman traveled to Jordan and Turkey to witness the testimonies of former detainees of the Abu Ghraib military prison, who were in many cases tortured, and in all cases released without being charged. As the victims gave statements to lawyers, Heyman sat in the room painting their portraits in watercolor and gouache, and scribbling their words onto the paper with their likenesses. Heyman’s efforts were in cooperation with an American lawyer who is building a case against those responsible for the controversial treatment of the prisoners.

Susanne Slavick, also an American artist, echoed this concern. At Brown she presented from her research for the book Out of Rubble (2011).  In the book and exhibition she featured the work of over 40 artists and architects, including herself, that have reacted to past and current wars. Her presentation on the work of Syrian-born and Brooklyn-based artist Diana Al-Hadid and American Adam Harvey, relate the extent to which artists are delving into such sensitive subjects as the fleetingness of life and lack of privacy today.

Top theorists and thought-leaders agree that the aesthetics of the recent interrelations between Iraq and America are worthy of interest. At the symposium, Wigoder shed greater light on Bilal’s work, The Ashes Series (2003-2013), and linked it to ideas such as simulacra and the representation of reality and meta-realities. Other critical analyses came from the evening’s panel moderator, Nada Shabout. As one of the foremost art historians writing, presenting, and curating about Modern and Contemporary Arab art, Shabout’s example lends credence to entire careers based on these issues.

Finally, the issues in question are not one-sided. As Americans question our actions over the past ten years, so should Iraqis. Rijin Sahakian, the final speaker at the symposium did just that. Founder of Sada, a non-profit organization that creates opportunities for education and artistic practices in Iraq and elsewhere, Sahakian pointed out the constraints of a Muslim society on studying the nude form, as well as those targeted by street artists in Iraq.

The big-picture does actually look hopeful though. At Art and War in Iraq, people saw the differences in perspective and opportunities for expression between Iraqis and Americans. The contemporary tendency of self-exposure does not always translate into seeing eye-to-eye. This non sequitor is why both sides of any issue need to question their own motives and ethics, and encourage leaders in relevant fields to devote their attention to these challenges. In the end, each participant brings his or her individual background and responses to bear on the shifting ground of a history that has linked the United States and Iraq; a history that is still being written.

[1] All quotations taken from the symposium.

[2] That averages out to Bilal being shot at about once every 40 seconds for a one month time period. However, the first half of the month was much less than this, and many times in the latter half of the month shots were being fired almost continually for hours on end.

Videos of the presentations from the Art and War in Iraq symposium can be viewed here.

Collection Spotlights features research into the histories and themes of individual works in the Bell's collection, including
Students Respond.