The David Winton Bell Gallery is excited to announce our recent acquisition of three photos by Graciela Iturbide – Mujer Ángel, Procesión, and Prótesis. Widely considered to be one of the most important Mexican photographers working today, Iturbide’s work focuses on female, indigenous, and intersectional identities in Mexico. Best known for her work in Zapotec, Mixtec, and Seri Indian communities, her black and white images of rituals, festivals, death, and the ephemera of everyday life often depict the overlap of traditional practices and the contemporary world.

Perhaps the best example of this intersection occurs in her most famous work, Mujer Ángel. This wistful, iconic image depicts a Seri woman running through the Sonora desert along the Arizona / Mexico border. Though she is dressed in provincial garb and surrounded by a vast, open desert, Iturbide’s “angel woman” carries what appears to be a boom box. This playful subversion of viewer expectations of separation between the traditional and the modern becomes a subtle yet striking indication of the dynamism and hybridity of her subject.

A lifelong feminist, Iturbide depicts her female protagonists as bold, independent, and powerful—even when they are not physically present. Images in her El baño de Frida (Frida’s Bathroom) series demonstrate the posthumous yet larger than life persona of Frida Kahlo, simply by documenting her things. Iturbide’s only series to contain color photographs, El baño de Frida allows the intense pigments and intimate objects in Kahlo’s bathroom—kept locked for over fifty years following her death—to reanimate the artist. Specifically, the depiction of Kahlo’s festively painted leg brace in Prótesis (prosthesis) reminds a viewer of both the vibrant quality of Kahlo’s work and the great mental and physical pain she channeled into it. In this way, Iturbide not only documents the space but also pays homage to Kahlo’s life, death, and continued aesthetic influence in Mexican culture. 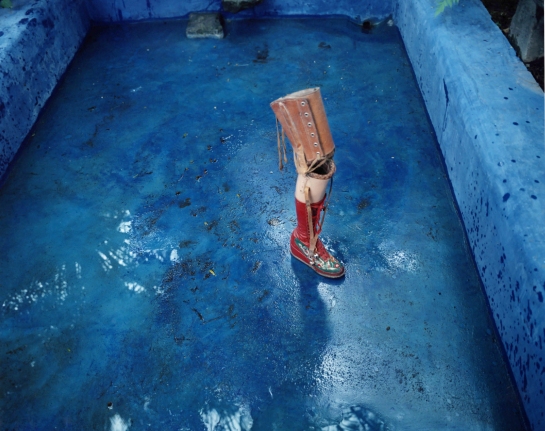 In seeking to understand Mexico in its totality—that is, composed of dynamic, diverse, and intersectional cultural practices—Iturbide embeds herself in the communities she depicts. As a result of the time and intimacy she devotes to her subjects, her images are empathetic and respectful, but also frequently bizarre, unexpected, or surreal. Procesión (procession) can be read as an allegory to this deeply relational process, in that the viewer and Iturbide herself seem to be swallowed up in an eerie throng of masked people. This sense of being immersed in a confusing yet amazing social gathering includes the viewer in the ritual yet reminds them of their need for greater interpersonal connection in order to understand it. In this way, works like Procesión resist simplification and stereotyping, and thusly demand a continued relationship with the subject matter.

Graciela Iturbide began her nearly fifty year long career under the mentorship of renowned photographer Manuel Álvarez Bravo at la Universidad Nacional Autónoma de México. She holds honorary degrees from Columbia College and San Francisco Art Institute and has been the recipient of the Lucie Award, the Hasselblad Foundation Photography Award, the Legacy Award from the Smithsonian Latino Center, and a prestigious Guggenheim Fellowship. Her work has been exhibited in major exhibitions at Tate Modern, Museo Frida Kahlo, Museo de Arte Moderno, and the J. Paul Getty Museum, and is part of permanent collections at LACMA, the Brooklyn Museum, MoMA, SFMoMA, Yale University Art Gallery, and the Centre Georges Pompidou. She currently lives and works in Coyoacán, Mexico.

Collection Spotlights features research into the histories and themes of individual works in the Bell's collection, including
Students Respond.