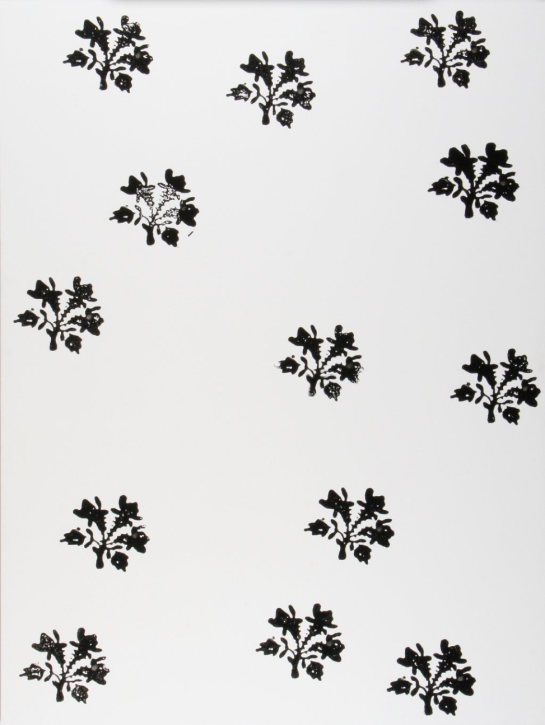 Christopher Wool is well known for his large-scale, monochromatic paintings of appropriated floral patterns, bold texts, and frenzied, expressive layers of paint. On this towering eight-foot tall sheet of aluminum, the pattern imagery is obscure and inexact, but still recognizable as a decorative floral element. The expansive surface is completely flat because the painting medium, alkyd, was chemically burned onto the aluminum. In this way, the imagery cannot be physically removed from the material. In the catalogue to the Guggenheim Museum’s recent Wool retrospective, the artist Richard Prince notes, “it’s married to the surface like a vein in marble.” [2] Wool himself once described the process of making his rollered and patterned paintings, saying “an interesting friction [is] generated by putting forms that were supposed to be decorative in such severe terms.” By producing a visual image from the permanent destruction of the surface, Wool conceptually and physically declared the perpetuity of painting. To this end, he also confronts the critical discourse around the medium in the 1980s which suggested that painting was merely decorative. [3]

In 1989 Wool took part in a residency program at the Vicola della Penitenza in Rome curated by Barbara Gladstone. Over two years twelve notable artists were invited to Rome for two-month residencies, which would culminate with a group exhibition. Other artists included Michel Auder, Richard Prince, Thomas Struth, and Cindy Sherman, to name a few. Wool’s residency was situated between Franz West’s and Laurence Weiner’s. While there, Wool continued to experiment with patterned imagery and “cultural piracy”. [4] The works produced by this group were exhibited together for the first time at the David Winton Bell Gallery in 1993 in the exhibition The Rome Studio. The collection is a testament to the various ways a muse, in this case the city of Rome, can produce wildly diverse and captivating works.

View the piece in detail on our website: http://www.brown.edu/campus-life/arts/bell-gallery/collection?quick=wool&display=single

Collection Spotlights features research into the histories and themes of individual works in the Bell's collection.

Follow the links above or below to our recent posts, or visit the Bell Gallery’s main website here: http://www.brown.edu/bellgallery.